The city of Agnone is located in southern Italy, in the province of Isernia, within the Molise region. It is located 120 km from Naples and 170 km from Rome.

The city of Agnone ("Cittadina") is complemented by other populated centers, such as Fontesambuco, Villa Canale and Rigaini. The first two are called Fractions ("frazioni"). They are administratively dependent on the "Comune" Agnone. The "Comune" is the smallest administrative unit in Italy. Riagini is just a group of houses, where some members of the Diana and La Civita families still live. 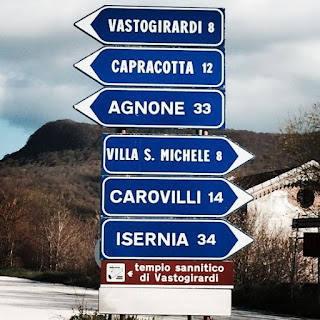 Agnone is in the heart of the primitive Sannio. It is the center of important archaeological remains of the ancient Osco-Sannite civilization. The name Agnone is said to derive from the ancient city of Aquilonia, destroyed by the Romans in 239 BC. The Sannitas were annihilated in time of Sila.

Close to Agnone, a table called the Osca Table ("Tavola Osca" or "Tavola di Agnone") was found, a piece of bronze containing letters of the ancient Oscan alphabet. Currrently this piece is in the British Museum, in London; in the section corresponding to the Roman Empire. We have seen it there in 1999.